The Pembrokeshire Coast & The Wales Coast Path
The images on this page are supported by colour analytics as an aid to interior design. Click on the icons to reveal proportional palettes, hexadecimal codes and colour labels.

​Click on the images to go to our Merchant/Affiliate and a choice of size and presentation options. Our personal choice is 'Framed Mounted prints'.
The Wales Coast Path in Pembrokeshire extends for some 186 miles, from St Dogmaels in the north to Amroth in the south. Challenging in places, more accessible in others, the Pembrokeshire section takes in some of the most dramatic coastal scenery in the British Isles. Towering sea cliffs and wave-scoured beaches, spectacular headlands, promontory forts and offshore islands, seabirds, seals and dolphins; every turn of the track brings the shock of the unexpected. Pembrokeshire is a place for all seasons. In summer the coast can swelter under Mediterranean heat. In winter (and not just in winter!) incoming frontal systems are heralded on the sea's horizon, making for crashing storms, brooding skies and flaring sunsets. The images on this page give a flavour of the spectrum. A more comprehensive series, following line-of-march and intended for itinerary planning, can be found on the Barrie Foster & Associates web site.  The order of the images on this page is dictated more by aspect ratios than geography!

Mooring Chain, Porthgain. An instantly recognisable feature on the quay at Porthgain Harbour. Textures and colour contrast make this an irresistible capture. Click on the image for purchase options. 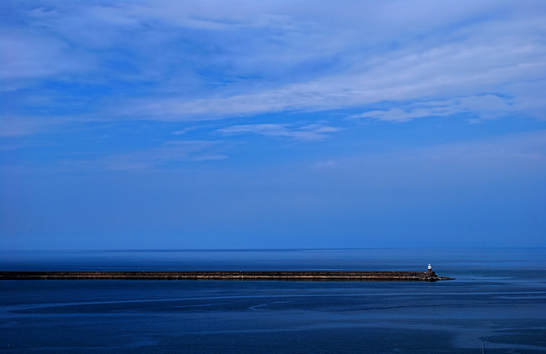 Study in Blue: Goodwick Outer Breakwater. Taken from the Marine Walk below Fishguard town on the hottest day of June 2009. Click on the image for purchase options.

Study in Grey: Becalmed, Fishguard Bay. After a day of heat the early evening haze turned the Bay to silver. Captured with a long focus lens from the secluded beach at Pwllgwaelod. The image is too far away from the norm to be accepted by our Merchant/Affiliate! Strange, given that it has the highest offline sales! Please contact me direct if you would like to purchase.

Marloes Sands & Gateholm Island. The sea fog persisted on the whole of the north coast throughout the day, producing strange effects where the land met the sea. Click on the image for purchase options. 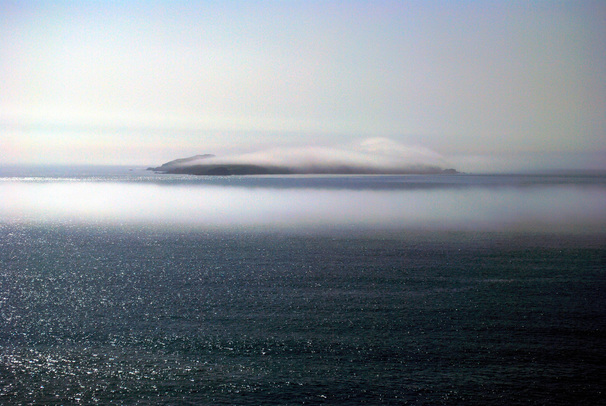 Dream Island: Skokholm Mist. The cusp of spring brings unique frontal systems to Pembrokeshire peninsulas. This capture of Skokholm Island was from the Wales Coast Path on the Marloes Peninsula. Skokholm was immortalised in 'Dream Island' by the naturalist Ronald Lockley, who lived here between 1927 and 1940. Lockley instigated research into Manx shearwaters, stormy petrels and Atlantic puffins. He set up the first British bird observatory in 1933, which sparked the British Bird Observatory movement. His writings and field work helped with the foundation of a number of conservationist groups and he was heavily involved in creating the Pembrokeshire Coast National Park. His ashes were scattered off Skokholm in 2000. Click on the image for purchase options.

A lone couple walk the two mile expanse of Newgale beach under a westering sun. One of the most popular surfing venues in Pembrokeshire, the beach has gone through cycles of change since the major storms of January and February 2014. Click on the image for purchase options.